Should the Pistons Ignore Fit and Take Cade Cunningham?

The Oklahoma State point guard is the consensus no. 1 pick, but Detroit took a different point guard in the lottery last year. While Cunningham’s talents are electric, he isn’t the only prospect with star potential in this year’s draft.

Share All sharing options for: Should the Pistons Ignore Fit and Take Cade Cunningham?

The Pistons have the toughest decision of any team that could have won the lottery. Oklahoma State point forward Cade Cunningham is the safe choice at no. 1. He has been the consensus pick all season. But the top of the 2021 NBA draft is loaded with elite prospects, including USC big man Evan Mobley and G League Ignite guard Jalen Green. There’s no guarantee that Cunningham will become the best player of the bunch. What makes it especially tricky for Detroit is that Cunningham doesn’t fit with the players it drafted last season as well as Mobley and Green do.

Detroit could blow up everything and build around Cunningham. The 19-year-old is good enough to justify that. He was the Big 12 Player of the Year as a freshman, averaging 20.1 points on 43.8 percent shooting, 6.2 rebounds, 3.5 assists, and 1.6 steals per game. There are no real holes in his game. Cunningham is the rare prospect who enters the league as a near–finished product. He’s a smart player who will have little trouble adjusting to the NBA.

Every team needs someone who can run its offense and be a threat to score and pass out of the pick-and-roll. What makes Cunningham special is that he combines those skills with the ability to spread the floor (40 percent from 3 on 5.7 attempts per game) and the size (6-foot-8 and 220 pounds) to defend multiple positions. He would give the Pistons their version of LaMelo Ball and Luka Doncic, two of the past three Rookie of the Year winners. All three are supersized ball handlers with elite basketball IQs who possess only average athleticism by NBA standards.

But no player comparisons are perfect. Cade isn’t as dynamic off the dribble as LaMelo, a savant whose ballhandling and passing wizardry make up for his lack of an elite first step. Nor does Cunningham have the same otherworldly scoring touch as Luka. There were times last season when he struggled to create separation against elite defenders like Baylor guard Davion Mitchell, a likely fellow lottery pick. That can also be an issue at times for Luka, except he makes contested shots in a way few players in NBA history ever have. The red flag in Cade’s statistical profile is his poor 2-point percentage—46.1 percent on 9.1 attempts per game. That indicates he settles for tough shots and doesn’t create much easy offense.

One knock on Cunningham is that he can be too passive. But what’s really going on is that he doesn’t force the issue when nothing is there. He’s a confident player who made huge shots for Oklahoma State in crunch time. The problem is that most of those shots came with defenders draped over him. It’s a tough way to make a living.

The good news is that he can impact the game even when his shot isn’t falling. Cade is bigger and stronger than LaMelo, and longer than Luka. Coaches won’t have to hide him on defense. He can stay in front of his man on the perimeter, switch screens, bang in the paint, and make plays all over the floor. That defensive versatility is why he’s such a safe pick.

He could instantly contribute to a playoff team as a glue guy who takes turns on offense. But instead, he will have the ball in his hands on a rebuilding team like Detroit without established veterans to take it away from him. That’s where the concerns come into play.

The Pistons used the no. 7 pick in last year’s draft on Killian Hayes, another 19-year-old point guard. They took him over more NBA-ready guards like Tyrese Haliburton, who finished third in the Rookie of the Year voting, and made him one of the faces of their rebuild. Playing off Cunningham would be a huge adjustment for Hayes, who had a hard enough time as a rookie at his natural position. He missed most of the season with a hip injury and struggled when he was on the floor, averaging 6.8 points on 35.3 percent shooting and 5.3 assists in 26 games.

But most of his struggles weren’t his fault. If the Pistons truly believed in him before the draft, nothing that happened last season should have really shaken their faith. Point guard is one of the hardest positions to learn, especially for someone coming from a lower-level league in Europe without the same caliber of athletes as the NBA. Hayes was always going to need time to adjust to the speed of the game, which he didn’t have due to the injury.

It’s too early to call Hayes a bust. He is a big point guard in his own right (6-foot-5 and 195 pounds) who flashed the ability to shoot and pass off the dribble at an elite level in Europe. The most likely scenario for him to fail in Detroit is if the team makes him play off the ball and removes what made him special in the first place.

That’s the risk/reward that comes with drafting a point guard in the lottery. They are like quarterbacks in the NFL: If you have two, you have none. A rebuilding team has to commit to one without knowing who else they might be able to take down the road. The Kings passed on Luka because they took De’Aaron Fox the year before. But the presence of Dennis Smith Jr. didn’t stop the Mavs from pulling the trigger. The Pistons are in the best position of anyone to know where Hayes falls on that spectrum. 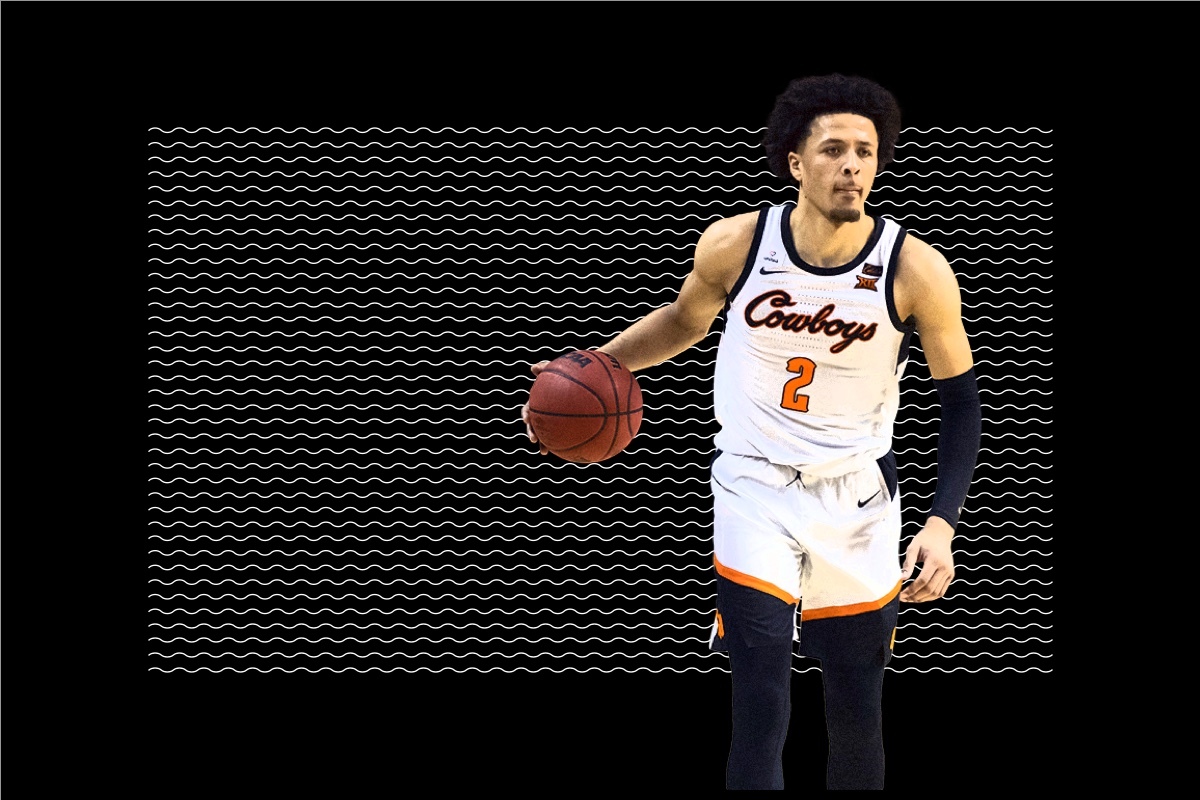 Detroit could elect to look elsewhere at no. 1, searching for a player who better complements Hayes. Green, an electric 6-foot-5 shooting guard who is the best scorer in the draft, would be the perfect backcourt partner. His incredible athleticism would pair well with the more deliberate Hayes, and his score-first mentality wouldn’t be an issue next to a more traditional point guard. With Green’s ability to run around screens and shoot from anywhere on the floor, he could eventually average 25-plus points per game even with Hayes dominating the ball.

If the Pistons want to go big, Mobley fits with everyone in Detroit. He’s just as special as Cunningham; he’s a 7-footer with a rare combination of size, athleticism, and basketball IQ. He was the Pac-12 Player of the Year and Defensive Player of the Year as a freshman, averaging 16.4 points on 57.8 percent shooting, 8.7 rebounds, 2.4 assists, and 2.9 blocks per game. Mobley is only scratching the surface of his potential. He’s an elite rim protector who can defend all five positions, score from anywhere on the floor, and pass the ball as well as any big man not named Nikola Jokic.

He would form an excellent pick-and-roll combination with Hayes, and be a good frontcourt partner for Isaiah Stewart, the no. 16 pick in last year’s draft. Stewart has the strength to guard bigger 5s, which would allow Mobley to be a perimeter defender, and each has the passing and shooting ability to play off the other on offense.

The problem with drafting Mobley over Cunningham is that it’s almost impossible for a big man to transition as quickly to the NBA as a primary ball handler. Mobley needs time to add weight to his frame (7-foot and 215 pounds) and isn’t nearly as good of a shooter at this stage of his career. Drafting him would be a decision made with the bigger picture in mind. The Pistons would feel the heat if Cunningham came out firing for another team.

But there are benefits to building a team over a longer time frame, as well as not completely botching lottery picks. The Mavs are the perfect example. Giving up on Smith was clearly the right decision, but they don’t have much young talent around Luka because they missed on so many other draft picks. Compare them with the Hawks and Suns, both of which are in the conference finals. In a vacuum, and with the benefit of hindsight, no one would take Trae Young or Deandre Ayton over Luka, but basketball teams are the furthest thing from a vacuum. Everything and everyone has to fit together. The whole point of building through the draft is to create synergy among a group of young players who become better than the sum of their parts. That’s even more important for a small-market team like Detroit that can’t count on attracting elite free agents. The Pistons need to nail all of their lottery picks. Not just no. 1.

They brought in a new front office last season led by GM Troy Weaver, a longtime Thunder executive who played a key role in their great drafts in the late 2000s. Everyone knew Kevin Durant would be a superstar. But it’s easy to forget that Russell Westbrook and James Harden were controversial selections at the time. Weaver showed that he’s willing to buck consensus when he signed Jerami Grant to a massive deal in free agency last summer, a move that was widely panned but now looks brilliant.

He now faces the biggest decision of his career. It’s not as simple as it might seem. Just because Cunningham is the safe choice doesn’t mean he’s the right one for the Pistons.

Next Up In NBA

The Woke, the Anti-woke, and Dave Chappelle

By Micah Peters and Justin Charity

Plus, the former NFL wide receiver shares what he loves and doesn’t love about today’s NFL

Arsenal vs. Crystal Palace, Plus More Flowers for Salah and Mané

By Ian Wright and Ryan Hunn

Power-Ranking the Players You Should Give Up On (or Not??)

By Sean Fennessey and Joanna Robinson

By Bill Simmons and Ben Solak